Recent young Chinese feminist tactics
Guangzhou police searched the homes of young feminists in May 2017, suspecting them of printing clothes with slogans against sexual harassment. Diana Fu, author of Mobilizing Without the Masses (2017), interviewed more than 40 new-wave feminists to find out why the government is afraid of these women who support rights that the government supposedly backs. Feminists use performance art protests that get much publicity. Fu found that the government is afraid of large-scale civil rights organizations and networks so activists to engage in small actions to make them appear like individual protests. For example, feminist groups help individual women sue for employment discrimination and help them write press releases. The blog of the group Women Awakening has over 76,000 followers; it’s in Mandarin but you can see photos and slogans in English like “no means no.” Feminist Voices is another group. An effective tactic, feminists shame famous men who suffer from “straight man cancer” such as Jack Ma, the founder of Alibaba Group. He said that having children when you’re young is the most important thing to do and praised the end of the one-child policy, although feminists pointed out that employers who don’t want to pay for two maternity leaves discriminate against hiring young women. Another smart tactic, feminists support labor organizations, including those for the more than 280 million migrant workers—over a third of them are women. (This alliance of students and workers fueled the 1989 Tiananmen Square democracy movement.)
https://www.washingtonpost.com/…/why-is-beijing-afraid-of…/…https://www.washingtonpost.com/news/monkey-cage/wp/2017/07/27/why-is-beijing-afraid-of-chinese-feminists/?utm_term=.90ffde40879a

Giavanna Munafo collected suggestions for article about white feminism and intersectionality. “Also, below, I’ve listed other a few selected materials that I have collected about these matters. I’m not necessarily endorsing them, but I think they present a useful range of perspectives for students to explore/investigate/critique.”

“As a Multiracial Woman, This Is Why I Need Intersectional Feminism” at Rewire.news <https://rewire.news/article/2016/09/02/multiracial-woman-need-intersectional-feminism/>

(Olivia, not list member, is the author of a recent online article called “Representation Matters” about zero-waste, feminism, and racial justice in Loam Magazine <https://www.loammagazine.com/read/2017/8/4/u69z7n1fefklhrwfjok51nk3vs6rxj>)

Other Selected Materials re: Intersectionality

– “’I Would Rather Be a Cyborg Than a Goddess’: Intersectionality, Assemblage, and Affective Politics,” Jasbit Puar,  European Institute for Progressive Cultural Policies (January 2011) <http://eipcp.net/transversal/0811/puar/en>

A 25-year-old woman teacher who became a sniper in Kobanê told NBC’s Richard Engle in 2014, “We stand here as a symbol of strength for women in the Middle East.” (PKK is the Kurdistan Workers’ Party, peshmerga or YPG are Kurdish troops in general, YPJ is women fighters, YJA-Star are the women’s guerrilla units, and PAJK is the Free Women’s Party.) The YPJ soldiers were the ones who fought the ISIS soldiers and rescued the Yazidis trapped on a mountain in Iraq. ISIS captured several thousand Yazidi girls and women, turning young ones into sex slaves. Some Yazidi women joined Kurdish women to fight the terrorists, as shown in photos.[i] After their escape, some developed a purification ritual, seen in a BBC video, but thousands remained in slavery or as child soldiers for ISIS.[ii]

[i] “Female Yazidi and Kurdish Soldiers Fight Back Against ISIS,” ABC News, 2016.

Janna Jihad Ayyad became an activist at age 11 in the occupied West Bank when her cousin and uncle died due to Israeli soldiers, explaining, “My camera is my gun. The camera is stronger than the gun … I can send my message to small people, and they can send it to others.”[i] She says soldiers are less likely to take cameras away from children. She has over 22,000 followers on Facebook.

Ipsos Public Affairs surveyed 17,5512 people aged 16 to 64 in 2017 in Europe, India, Japan, Mexico, Brazil, Argentina, Peru, Russia, South Africa, South Korea, Turkey, US, Australia, and Canada. In India, 88% of respondents say they believe in equal opportunities, the same as the global average, and 85% say they actively support women’s rights, second only to China in their activism. More people define themselves as feminists (83%) than in any other country, much more than the global average of 58%. Men are slightly more likely than women to say they speak up for women’s rights, but half of the sample say they are afraid to speak up for equal rights—more than any other country (followed by Turkey and Brazil). However, 80% of Indians say equality is not yet achieved (more than the global average of 72%) and 48% say that men are more capable than women, 46% say women are inferior to men (the same as Russia), and 44% believe women should just stay at home (compared to the international average of 17%). It’s not clear how Indians combine feminism and feeling women are inferior.

Manal Al-Sharif grew up in Mecca.  She and her sister were painfully circumcised despite the fact that the Prophet’s daughters were not. She had surgery before marriage to repair some of the damage.  She said in her autobiography Daring to Drive that her generation was “brainwashed” to be extreme Muslims and they in turn “imposed this level of segregation and religiosity on their elders and set these draconian rules for their parents, rather than the other way around.”[1] By the early 1990s, female students had to wear not only the abaya but also the niqab to cover the face. Their teachers encouraged them to talk to their parents about sins, “most of which involved the behavior of women.” Girls were not supposed to run and jump for fear of losing their precious hymen, or play with boys, so that after living in a kind of house arrest, she said, “I became fully aware to what extent a girl’s virginity determines her fate in Saudi society.”[2]

The first government school for girls opened in 1964 without playgrounds and no activities such as music (considered satanic), theater, movies (there are still no movie theaters in the kingdom, or a library—but they weren’t allowed in the public library in Mecca. Even photography was haram (forbidden). Some novels were allowed, so her heroes were fictional characters like Jo in Louisa May Alcott’s Little Women, Mowgli in Rudyard Kipling’s The Jungle Book, and Sinbad the Sailor. Students memorized and recited rather than responding to question or analyzing. The Muslim Brotherhood and other radical groups were put in charge of education as Salfis gained influence in the 1980s and 1990s. They taught fear of going to hell and hatred of infidels, including non-Sailfis such as Shiites. Their religious teachers were male sheikhs who lectured over the school’s public address system and taught that women should get their husbands’ permission for everything. In university young women couldn’t participate as they listened to professors lecture to male students, with the exception of medical school students. But even the female students received a government monthly allowance. Some “tomboys” called aboya dressed like men and had a close woman friend. She became a leader in the campaign for women to drive, described below, lost her job as a consequence, and moved to Dubai. She started a campaign called I Am Lama that helped pass the first Saudi code against domestic violence and Earaj, a Twitter campaign to release domestic workers held in the Dammam prison where she was imprisoned for driving.

Al-Sharif reported almost every woman she knows has been harassed by her driver in a country with no public transportation and where many woman who pay as much as a third of their salaries to their drivers. She was put in a jail crawling with cockroaches where women and their children shared cots in a room with an open hole for a toilet. The Arab spring and the increase in use of social media inspired her where women had a voice. She started a Facebook group called Saudi Female Employees of Aramco. On November 6, 1990, 47 women drove in the capital, Riyadh. A young woman named Bahiya started a Facebook page called “We are driving May 17.”  Wajeha al-Huwaider posted a video driving in 2008; like al-Sharif who worked in the Aramco compound. Twitter became the most popular social media by 2011 when al-Sharif started @Women2Drive and a YouTube video that quickly received 120,000 views and became one of the top videos globally. She called on women to drive on June 17 and about three dozen women did drive in various cities but none were arrested. She stayed home to avoid being jailed again.. To avoid being called a protest, she asked women not to drive in groups and record themselves alone. She was called a Westernized whore and traitor. Her strategy was “never defend and never attack.” 216 A Facebook page called “By Iqal” called on men to beat women drivers and reports predicted there would be no more virgins if women were allowed to drive. In response, a Facebook page stated that women would respond with her shoe, as showing soles of shoes are an insult. Her arrest became international news. A new group started a Women2Drive Facebook page, including a 14-year-old girl who learned how to drive and drove her single mother and sisters. The king told the Shura council in October “We will not accept marginalizing women.” 270 She was named one of Time magazine’s 100 most influential people and accused of being trained by CANVAS.

Author Jennifer Baumgardner dated the Fourth Wave as starting around 2008; it “continues the legacy of the Third Wave and moves it into the tech-savvy, gender-sophisticated world of blogs, Twitter campaigns, transgenderism, male feminists, sex work and complex relationships within the media.” Baumgardner believes the Fourth Wave’s use of social media transformed politics and feminism. Because of media advances and globalization, the waves of mass change are coming faster. Some feminists define the Fourth Wave as young people’s renewed interest in women’s rights and the environmental advocacy, strongly influenced by globalization issues. Other Fourth Wave interests are ecofeminism and spirituality, which were also part of the Second Wave (see my Brave: Young Women’s Global Revolution for more about feminism). Feminism reemerged among young women in the UK and US, according to studies by Bellafante, McVeigh, Sheehy and others.[i]

Celebrities like Beyoncé and Emma Watson are making feminism cool again. Young feminist TV actor, Rowan Blanchard, 14, joined activist actor Amandla Stenberg in being awarded a feminist celerity of the year award by Ms. Magazine for her online essay about intersectional feminism.[ii] Blanchard’s essay went viral with more than 97,000 likes on Instagram.[iii] Like Emma Watson who toped the list the previous year, Blanchard spoke at the UN for gender equality. She spoke at the UN Women’s annual summit in June 2015, where she explained how gender inequality affects youth. Her speech included her experiences with sexism, saying she has been a feminist since preschool when she was told she threw a ball like a girl.[iv] She is active in HeForShe, which is led by Watson. She explained that girls her age would rather be liked than be leaders and are judged by their appearance more than their talents. She does outreach to try to change this problem. Many girls tell her they don’t feel safe at school because of harassment and their teachers don’t encourage them to study STEM subjects. Sexism is a problem for boys too, like her nine-year-old brother was disparaged for being like a girl for expressing his emotions.

[i] Tracy McVeigh, “Meet the New Wave of Activists Making Feminism Thrive in a Digital Age,” The Guardian, June 1, 2013.

Video excerpts of various teens talking about their values, including speaking up for what you believe in.

Anna North, “What Does America Stand for? We Asked Teenagers,” New York Times, 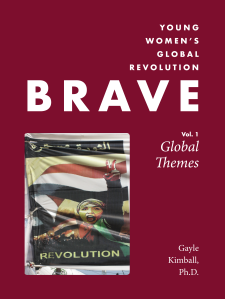 Global Youth Transform the Future
Create a free website or blog at WordPress.com.