A poll of Millennials in 2017 reported that 71% of them want a third major party since neither the Democrats or Republicans do a good job of representing them (and 63% disapprove of President Trump). Slightly more men than women favored a third party.
https://www.usnews.com/news/national-news/articles/2017-11-29/millennials-want-a-third-political-party-poll-shows

Signaling the importance of staying in touch with the grassroots, a 20-year member of Congress, the chair of the Democratic Caucus and in line to be Speaker, Joseph Crowley (age 56) was defeated in the June 2018 primary. He sent a substitute for a debate with his opponent Alexandria Ocasio-Cortez, leading to criticism from the New York Times editorial board. An educator working with high school students (a graduate of Boston University), Ocasio-Cortez said she spent two years talking with the voters in the New York City district, which is half Hispanic—she’s fluent in Spanish. She recruited volunteers to campaign in six languages.

She posted a viral video titled “The Courage of Change” where she said, “Women like me aren’t supposed to run for office.” She writes her own social media with a large Twitter following. She has a Puerto Rican mother, was born in the Bronx, is only 28, ran her first race against Crowley, is a member of the Democratic Socialists of America, supports Black Lives Matter, and was outspent by at least 10 to 1. Before she ran, “I felt like the only way to effectively run for office is if you had access to a lot of wealth, high social influence, a lot of high dynastic power, and I knew that I didn’t have any of those things.”[i] What changed her mind was her participation in the Standing Rock protests against the Dakota Pipe line in 2016. The day she got back home, a national organization called Brand New Congress asked her to run for Congress. Ocasio-Cortez advocates eliminating ICE, universal healthcare, a $15 federal minimum wage, tuition-free public colleges, and making living in New York City affordable. Echoing the recent progressive emphasis on values, she said, “For me, it’s all about leading with our values and leading with our issues…in a moral society.” Hopeful, she says, “We are never beyond repair.” (She and Cynthia Nixon, candidate for governor, endorsed each other.)

June 15: March For Our Lives: Road to Change. Starting in a Peace March in Chicago, the students bused to 20 states and 75 cities to “get young people educated, registered, and motivated to vote.” They pointed out that more than four million teens turned 18 in 2018 and Jaclyn Corin said in email, “We know there is no better way to bring about change than voting.” They described their effort as “a youth-led movement on a mission to elect morally-just leaders.” (The simultaneous Poor People’s Campaign also emphasizes the morality issue.) Tactically savvy, they partnered with Rock The Vote, Headcount, NAACP and Mi Familia Vota, They encouraged students to form intersectional activist clubs in their schools based on relationship building. They sponsored a petition that got hundreds of thousands of signatures, created merchandize to buy, and reached out to partner with gun violence prevention organizations.[i] “Price tags” calculated the amount of money that politicians accepted from the NRA, state by state, to be printed out and displayed. The campaign’s specific goals are to create “a searchable database for gun owners; funding the Centers for Disease Control to research gun violence so that reform policies are backed up by data; and banning high-capacity magazines and semi-automatic assault rifles.”

*Feminist Visions of the Future: https://www.youtube.com/watch?v=5sJszKFyJ08

*Counselors and a student explain how to develop resilience in the face of adversity: https://www.youtube.com/watch?v=1tsirxrKqCg

*The political views of Generation Z students in the US, India and Turkey:

*The Gezi Park Uprising in Istanbul as explained by a Turkish partipant: https://www.youtube.com/watch?v=We4NXaVlJJ4

*Jerome Roos, a Dutch activist and editor of ROAR Magazine discusses how to change the neoliberal system: https://www.youtube.com/watch?v=LhsKZrlgc6s

*Impressions of Finland by a Chinese student: https://www.youtube.com/watch?v=_39eeL31uo8

Why The Indian Youth Is Not Entering Politics

Posted by Janhavi Ukhalkar Telpande in Politics, Staff Picks
May 15, 2018

With the Karnataka elections in full swing, many young people were seen contributing to election campaigns in a significant way. So be it tweeting, sharing, appealing others to vote, discussing, etc – young people were actively involved in the whole process. Until the results come out, one cannot be sure about the real-time impact the participation of youth has created. But one thing we can be sure of is that lack of participation from the youth can definitely have an extremely negative effect on the overall results.

More than 50% of India’s population is below the age of 25, and more than 65% below 35. So going by statistics, India’s youth can play a fundamental role in shaping and running the biggest democracy in the world.  Yet, as per a recent report, only 6% of the leaders and ministers in the government of India are below the age of 35. This is really shocking and implies that in spite of the availability of talent, enthusiasm, knowledge and resources, the youth of this country are not interested in jumping onto the bandwagon, be a part of the politics in India and contribute in the workings of the country. Where we have numerous young and extremely successful entrepreneurs who are earning huge money, we don’t have an equal number of young political leaders who can run the country. We also have a majority of the population which just wants to criticise but when asked to change the situations themselves, they are completely reluctant to co-operate.

What exactly is keeping the young intelligent minds of this country from getting into politics? Why, even in the 21st century, do educated and bright youths not want to start a full-fledged political career?

Below are some of the factors that might be the reasons.

It is all so unpredictable and uncertain

Politics is unpredictable. Period.  Agreed, some of the parties in the Indian politics today provide huge economic benefits to the “karyakartas” sometimes even better than a highly paying job. But till what time? There is no job guarantee and there is no written contract protected by the law. Besides, most of the money provided is black and is liable to scrutiny. Once you go into it, you also have to play according to the rules of politics and the rules keep on changing based on the situation. What if the young people are not able to adapt? Families which are used to living a routine life with a monthly pay cheque would not advise their children to enter such a volatile field.

A fierce competition which stops at nothing

If you think, nepotism exists only in Bollywood, think again. Indian politics is one of the world’s biggest fields for nepotism where most of the picture is run by the aristocratic, old Indian political families. A leader’s child is expected to follow their parent’s footsteps. Surprisingly, they might get more popular than a genuine youngster who has just entered the field and is working hard. It’s extremely difficult for the outsiders to prove one’s talent, work and achievements and reach out to the public at the grass root. Also, powerful netas have various means to ensure that a good newcomer is shown ‘their place’ if they come in the way of their successor’s path. And to add to it, there is hardly any guidance for the newcomer. So it’s a slippery situation altogether.

It’s all about money, honey!

No two thoughts about that. One has to have a lot of money to promote, advertise and publicise one’s own work.  More than the actual work one does, it’s more important today to promote the work. Millions are spent today on advertising and marketing. Even for doing some really good work, one requires money and it’s hard to come from middle-class families with limited savings and make a commitment. In such cases, one has to raise the money through illegal means which is a big reason not to enter politics.

Every member of the party has their own ambition to succeed and there are limited means of achieving that success. Parties have a very complex internal structure driven by egos and ambition. With the fierce competition inside and the ever-changing volatile situation outside, every member holds on to their own hidden agenda within the party. Any new entrant posing a threat to their agenda can be easily exterminated and stopped. It also creates major trust issues and long-term loyalties are hard to find. So young people find it difficult to sustain their goal and focus and everything thus becomes only a power game and not just the plain career choice it was supposed to be. Young people might not find it “worth it” in the long term.

The increasing graph of crime rates and criminal charges

Just do a check of the some of the big political parties in India and the number of politicos with criminal charges. It’s astounding and shocking. Every day there is some new story about the political parties and all the illegal practices happening within a party – be it corruption, murder, money laundering, land grabbing. This news can scare the shit out of even some of the bravest people around. It’s no surprise that youth want to keep away from the murky quicksand which can engulf anyone. No one is sure what happens. Even if they are clean what if they are wrongly implicated or cheated? Better keep away! Even parents are scared and would not want their children to enter a profession so full of lies, uncertainty and danger. 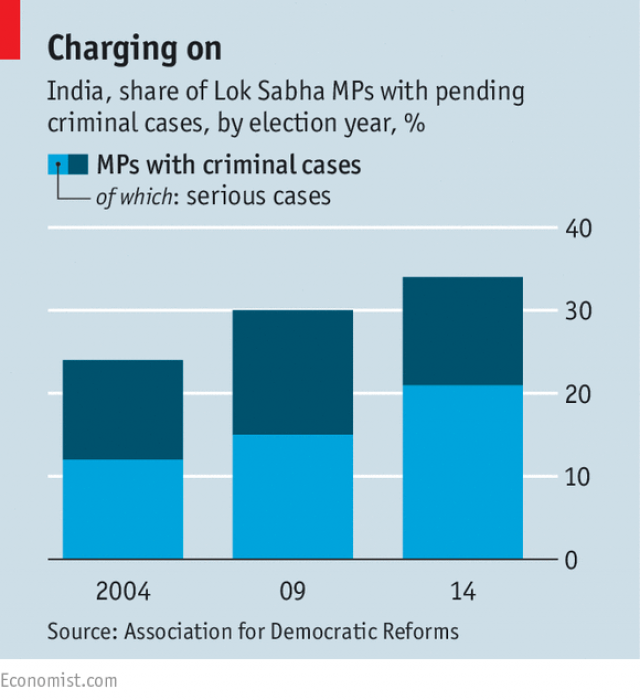 The life is very hard dude

If one compares a life with a desk job – sitting in an AC office for eight hours a day and getting a pay cheque at the end of the month – to the life in politics –  constant travelling, keeping in touch with public, creating network, making physical efforts at the ground level, visiting internal rural areas – it’s easy to understand who wins! Very few are ready to pay the price for the “so-called” social service or doing good for the country. Also, one cannot be fully sure that his hard work will really work.

Is it really worth it?

In any other field of work, one is liable to get the results of the hard work and efforts they have put in. Even in Bollywood or cricket which are very uncertain and creative fields, one’s talent is sure to get noticed one day or the other. But is it true for politics? And what exactly can be the basic reason to join the politics – apart from the fame and money? Is it social work? Is it service to the people of your country? Or is it just plain passion? Even if the intentions are in the right place; is it worth the efforts – looking at the number of compromises on has to make which can impact a huge number of people?

It’s extremely tough to be connected to your roots and keep serving the people irrespective of the constant negativity one has to encounter every day in politics. And there would be very few youth who are ready to take on such a war.

So the end result – youngsters keep away and the country is left to some indifferent goons who just want to fill up their accounts.

Reports on women’s revolutionary role in the Middle EastRetrieved from http:

Zainab Salbi, founder of Women for Women International, produced a documentary about women in the Arab Spring.

Reports on women’s revolutionary role in the Middle EastRetrieved from http:

[1] Courtney Raddsch, “Unveiling the Revolutionaries: Cyberactivism and the Role of Women in the Arab Uprisings,” Rice University Institute for Public Policy Research Paper, May 17, 2012.