Young Women on Dating and Feminism in America

The weirdness of dating as a young feminist woman in America

View this collection on Medium.com

SAN JUAN, P.R. — The uprising that toppled Puerto Rico’s leaders might be traced to a day earlier this month, when the governor, Ricardo A. Rosselló, was not even on the island. He was on vacation in Europe, curating his Instagram feed with smiling pictures of him and his wife savoring Paris.

The political legacy that he and his father — a former governor — had built began to show the first signs of crumbling a few days into the trip, when two top former members of his administration were indicted on federal corruption charges. A day later, several nasty text messages that he and his close circle of powerful friends had written — one calling a prominent female politician a “whore” — were leaked. Mr. Rosselló frantically cut his vacation short, hopping off a cruise ship at a port of call and onto three different planes, leaving his family behind.

The Colectiva Feminista en Construcción, a women’s group that had long been at odds with the governor, had already sprung into action. When Mr. Rosselló walked off a plane on July 11, looking bleary-eyed and distracted, he found nearly 100 people brought in by the feminist collective and other activist groups, waving protest signs and demanding that he step down. 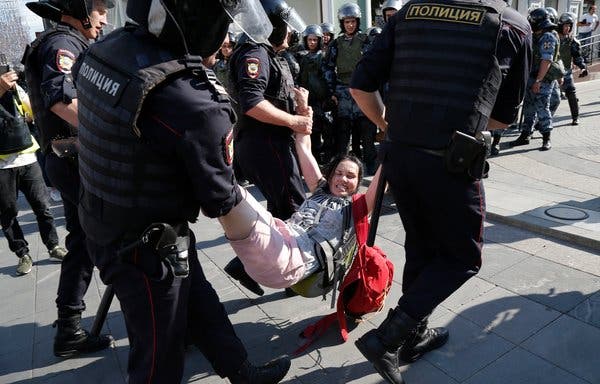 Every week a group of bubbly South African teens crowd into a studio to play hip-hop music and trade views on neighbourhood gun crime for their community radio show.

For them, these are not remote topics. The stories they discuss are devastatingly close to home for the young broadcasters — one reporter’s father was shot dead on her birthday, while another is the daughter of a reformed gun-wielding criminal.

The 20-odd teenagers who host Alex FM’s weekly “Bigger Than Life” radio show are determined to help stem the violence that touches so many lives in their densely populated and crime-ridden Johannesburg township of Alexandra.

“I can assure you that every single child of Alexandra can be a living testament … every night, from Friday to Sunday, or even sometimes on weekdays, we always hear gunshots — it is like an always thing,” 16-year-old radio host Jennifer Ngobeni told AFP.

https://www.nytimes.com/2019/07/24/world/asia/china-military-hong-kong-taiwan-protests.html?
Warning that protests convulsing Hong Kong were crossing a line, China hinted broadly on Wednesday that it was prepared to use military force in the territory if necessary to retain Beijing’s control.

Will Gen-Z Save the World?

The revolt against Boomer morality.

There is some sort of hard-to-define spiritual crisis across the land, which shows up in rising depression rates, rising mental health problems. A survey that the Pew Research Center released late last year captures the mood. Pew asked people to describe the things that bring meaning to their lives. A shocking number of respondents described lives of quiet despair:

“I no longer find much of anything meaning, fulfilling or satisfying. Whatever used to keep me going has gone. I am currently struggling to find any motivation to keep going.”

“It would be nice to live according to my being rather than my blackness. I will never know how a totally worthwhile life will feel because of this.”

“Drugs and alcohol are the shining rays of light in my otherwise unbearable existence.”

“I don’t feel very satisfied with my life. I’m a stay-at-home mom and my life is endless monotony and chaos.”

The Pew survey reveals a large group of Americans down the income and economic ladders, who are suffering from economic scarcity, social scarcity and spiritual scarcity all at once. Less educated people were less likely to say that friendship was a source of meaning in their lives. They were less likely to say hobbies were a source of meaning, nor was learning, nor good health nor stability.

When people overall described the sources of meaning in their lives, they stuck close to home. Nearly 70 percent identified family as a source of meaning, followed by career, making money, and practicing a spirituality or faith. Only 11 percent said learning added meaning to their lives. Only seven percent said that helping others was a meaningful part of their life.

If you ask philosophers how people fill their lives with meaning, they usually point to some version of serving a cause larger than self. William James said that meaning was found in tireless struggle on behalf of some sacred ideal. Susan Wolf says that meaning is found in active engagement in important projects.

But the meaning of meaning seems to have changed. When people in this survey describe meaning, they didn’t describe moral causes or serving their community, country or God. They described moments when they felt loved, satisfied or good about themselves. They described positive personal emotions. As one respondent put it, “It’s easy to forget what’s wrong in the world when you are pretending to be a puppy with your daughter.”

It’s as if people no longer see life as something that should be organized around a specific vocation, a calling that is their own way of doing good in the world.

Everything feels personalized and miniaturized. The upper registers of moral life — fighting for freedom, struggling to end poverty — have been amputated for many. The awfulness of the larger society is a given. The best you can do is find a small haven in a heartless world. One respondent said he found meaning in the tiniest things: “Small-scale nature — individual bugs and plants — are quite pleasing. I like to be able to focus on things that don’t care about me or the larger world.”

I’ve just finished a four-month tour for my book “The Second Mountain,” talking with thousands of people, and I certainly encountered the disillusioned America described in the Pew survey. But the big thing I encountered was the seismic generation gap. People my age rag on the younger generation for being entitled, and emotionally fragile, etc. But this generation is also seething with moral passion, and rebelling against the privatization of morality so prevalent in the Boomer and Gen-X generations.

They can be totally insufferable about it. In the upscale colleges on the coasts, Wokeness is a religious revival with its own conception of sin (privilege) and its own version of the Salem Witch Trials (online shaming). But the people in this movement have a sense of vocation, moral call, and a rage at injustice that is legitimate rejection of what came before.

I recently met a group of high school kids from around the United States and Africa involved in the Bezos Scholars program. In our conversations they didn’t define their identity by where they were from, or even by their ethnicity and race. They defined themselves by what project they work on — serving Native Americans, working for clean water. Similarly, high school students generally are more likely to define themselves by their political stances and their vocations, rather than whether they are jocks or drama kids.

I’ve also found that college students are eager to talk about a moral project entirely absent from the Pew survey: Doing inner work, growing in holiness. Many seem to have rediscovered the sense, buried for a few decades, that one calling in life is to become a better person. Your current self is not good enough. You have to be transformed through right action.

It’s often uncomfortable and over the top, but we’re lucky to have a rebellion against boomer quietism and moral miniaturization. The young zealots may burn us all in the flames of their auto-da-fe, but it’s better than living in a society marked by loneliness and quiet despair.